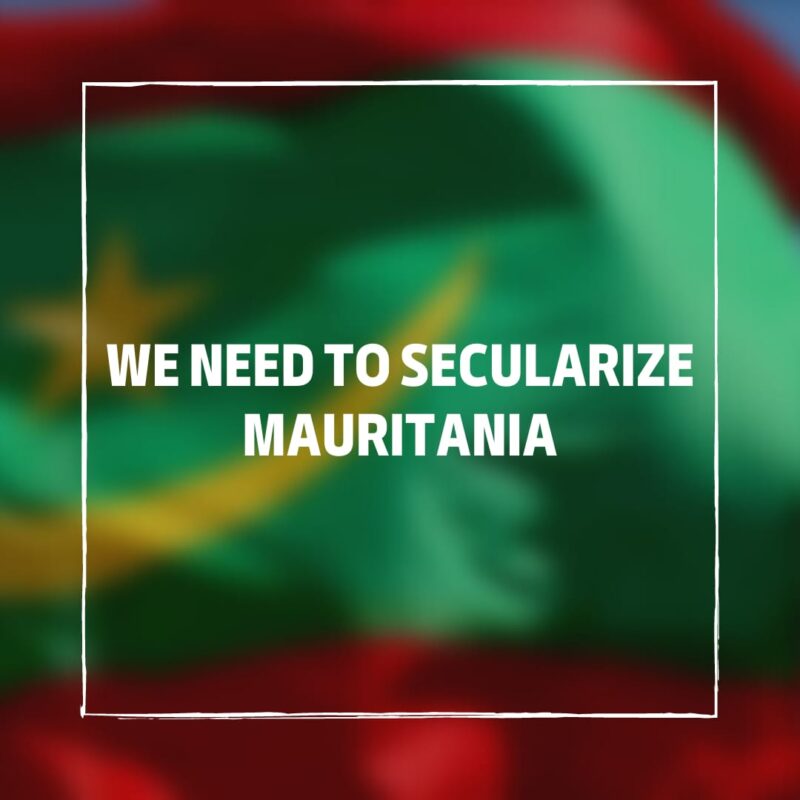 The beginnings of the emergence of secular thought in Mauritania did not crystallize except during the past ten years thanks to the efforts of a group of young people who completed their university studies, and this elite formed the “carrier” of enlightening ideas, and proceeded to disseminate them in the Mauritanian society.
The Enlightenment in the Arab countries adopted these values ​​long before us
However, the Mauritanian elites were late in time in recognizing secular ideas and being influenced and demanding them for several reasons:
1 .  The Mauritanian state was and still is run by the religious establishment.
2 .  The absence of an elite in Mauritania that takes upon itself to play an active role in the change, so their relatively few numbers did not constitute an incentive to demand change and modernization.
3 .  Religious tyranny put a great barrier to modernization, enlightenment and culture in Mauritania
4 .  The reluctance of the elites in the past to demand liberal and secular ideas that demand equal rights, so as not to lose the privileges that they had obtained.
The increase in voices calling for the secularization of the state was a result of the emergence of a secular youth elite whose demands became high, as they were tired of the silencing of mouths and the state’s religious laws that restrict freedom of expression, demanding an end to the rule of the “one-thought and one-choice system”
Mauritanian youth demanded the secularization of the state because the state existed to preserve pluralism and ensure freedom of choice and to show this choice to all, and this is what we did not find under the religious rule of Mauritania.
The legal system has been updated with more repressive texts
Such as the broad violating sanctities law, which makes the arrest process without specific features, so any act can be added under the violating the sanctities clause.
The Mauritanian security forces have also recently carried out arrests
It affected the most prominent secular activists, Mafwola Ibrahim, a human rights activist, Sheikh Noah, a journalist and novelist, Mini Ibrahim, Ahmadna, Sheikhani, and others.  The measures were to prevent them from leaving Mauritania
According to a systematic strategy pursued by the Mauritanian government to silence free voices.
What is happening inside Mauritania today is like a candle that illuminates the darkness of reality and a turning point from the stage of silence and faint voice to the stage of frank confrontation with the institutions that restrict, rob and violate the freedom of the Mauritanian people, and this is what gives hope for our future.
The demands of the free Mauritanian youth today is the secularization of the state
To get out of the bottleneck we’re stuck in For a long time

And this will not be achieved easily, because the religious and military institutions that control the levers of power in Mauritania will not allow this easily.
We must continue to make efforts to achieve our goal of curbing the violation of human rights by force of law as it currently exists in the Mauritanian legal system.
The question is always how to be free?  How do we reach freedom?

Without destroying these obstacles, freedom, rights, liberalism and secularism will remain mere elitist demands!
This is what we are reaping as a result so far, we are still confined to the stage of demands!
We must shift from the stage of demands to the stage of change and actions As long as we are afraid to pay the price and remain silent in front of the oppression of those who face courageously and shyly denounce!
We will stick our heads in the ground like ostriches
But let us remember that rights are not given but taken away
“The Secret Struggle”
It’s a stage when we’re stuck in for a long time
We won’t have our rights recognized for long either
The world is progressing and we are demanding
The world invents and we denounce
The world sanctifies individual liberties and we crucify them
The world works and we look and make more logos
The world equals rights and we violate them
Countries have moved to a secular system that does not differentiate between any of its citizens, and we are still adopting a religious system that deprives non-believers of the rights of citizenship and even kills them.

Mauritania Has the Worst Apostasy and Blasphemy Laws In the world