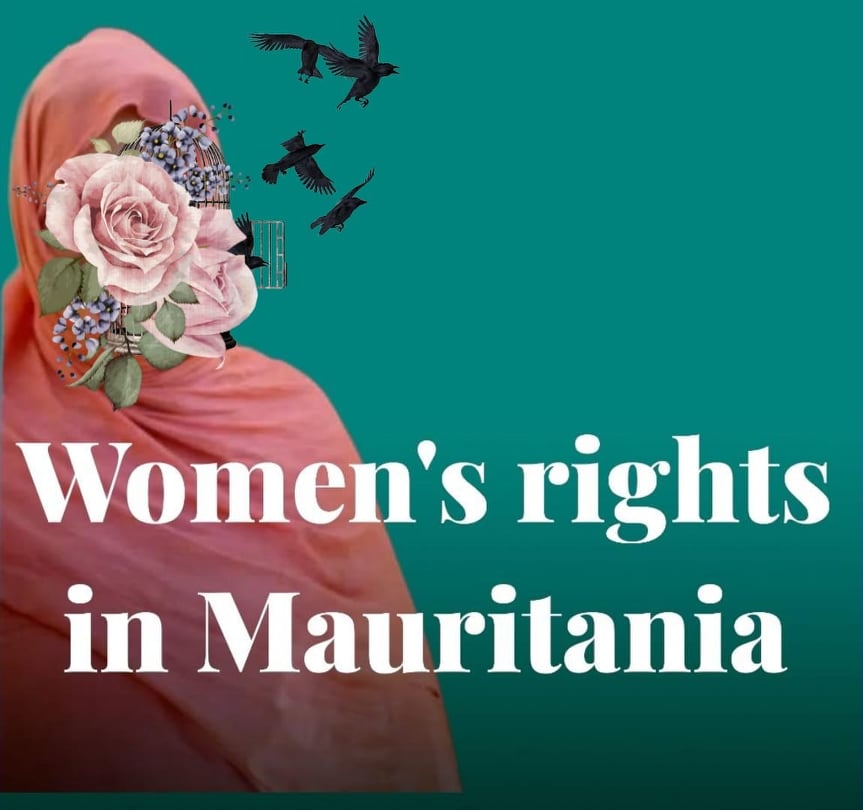 Women’s rights in Mauritania are among the worst in the world.

Mauritania’s women have an extremely low status, and they are discriminated against when it comes to employment opportunities, education, healthcare, and even freedom of movement. In most cases, women who want a better life for themselves will have to abandon their families and move to one of the major cities. However, this is not always a safe option either.
One of the factors that restricts the role of women in Mauritanian society is Islamic law (sharia)
where women are not allowed to have social and economic independence.
Girls’ education is mostly limited to Quranic schools, which achieve minimum literacy skills for them , Since there are no schools in many villages and rural cities, and even in large cities, they are prevented from teaching in regular schools.

Why is women’s rights in Mauritania so bad?

Mauritania is one of the country in the world that practices female genital mutilation (FGM). FGM is a practice where the female genitals are cut off and/or stitched up and has no laws against Rape .
The purpose of FGM is to “cleanse” the woman and make her less sexually desirable for men , This practice is one of the world’s most prolific and widespread violations of human rights.
In Mauritania, FGM is considered a religious rite and is performed for religious reasons. FGM results in death and long-term damage , According to the Global Policy Institute, FGM in Mauritania is “at the center of a war”. Another issue that is prevalent in Mauritania is that women are not allowed to leave their homes without a male family member , Adding to the “unhappy” situation of women in Mauritania, Parliament has not yet approved a draft law on gender-based violence.

In addition to underage marriage, Mauritanian women suffer from a widespread phenomenon of sexual assaults against them, and women who bear sexual violence, according to Human Rights Watch, face “institutional barriers, including police and judicial investigation procedures that do not taken the gender seriously.
Since Mauritanian law “does not adequately define the crime of rape and other forms of sexual assault , Girls and women are prevented from reporting abuse, because they may find themselves accused of adultery under Islamic law.
During 2018, there were women in prison for adultery who said that they had in fact been raped and Many families refuse to report cases of rape, for fear of social stigma, so rape cases are settled between families and tribes, which contributed to the spread of this phenomenon in Mauritania.
Despite the widespread talk about the high incidence of rape in this conservative country, there are no official statistics about it , Hundreds of Mauritanian activists signed an online petition calling for amendments to the law criminalizing rape, by not treating this crime as a case of adultery and with the victim as a suspect, as stipulated by Islamic law.

Adding to the “unhappy” situation of women in Mauritania is the fact that Parliament has not yet approved a draft law on gender-based violence, which was rejected twice on the grounds of “contrary to Islamic law ,The draft “gender” law presented by human rights organizations includes five chapters and 55 articles, and is concerned with criminalizing several acts, most notably rape, beating, harming, female genital mutilation, detention, sexual harassment, child marriage, blackmail, insults, imposition of homosexual relations, and imposing restriction of marriage or children in civil status.
The approval of the draft gender law would fill the legal vacuum that the Mauritanian legal system has suffered and continues to suffer from, and will contribute to alleviating the suffering and pain of victims of violence.
This project faces a great rejection of its opposition to Islamic law, which is the main source of legislation in the country.

In early 2021, the Mauritanian Association for Mother and Child Health said that the year 2020, which was marked by the Corona pandemic, witnessed a doubling in the number of cases of sexual violence in the country According to the association, last year Mauritania recorded the highest number of rape victims since 2002, with 1,269 cases of violence recorded during the past year, 351 of whom were rape victims ,The report indicated that the association recorded 14 cases of sexual assault for the age group less than 5 years, 62 cases for the group between 11-16 years, and 129 cases for the group 16-18 years.
The Mauritanian Association for Mother and Child Health said, “Violence directed against women and children is concealed in Mauritania, where the customs, traditions and culture of society are considered the most dangerous factors that fuel this phenomenon in its multiple types ,a painful reality because violence against women in Mauritania has not witnessed any measures to stop it, and the government’s talk about confronting this phenomenon is just words without actions.

What can be done to improve the situation?

Discrimination and violence persist in the law

Although Mauritania has ratified the Convention on the Elimination of All Forms of Discrimination against Women (CEDAW), it has introduced a general reservation under which only articles that comply with Islamic law are applied , This restriction violates international law in that it is inconsistent with the object and purpose of the Convention , Mauritanian law remains highly discriminatory, especially in the family domain .

According to the Family Law adopted in 2001, women remain permanent minors.
A woman has no legal right to administer her property, nor the property of her children, without the consent of her guardian or husband. Polygamy is permissible (Article 28).
According to the 1961 Nationality Act, women do not have the same rights as men regarding the transmission of their nationality to their children (Article 13).
The Criminal Code prohibits all forms of abortion, punishable by a fine and imprisonment (Article 293).
Moreover, the practice of brother marriage to her deceased husband’s brother or sister to her deceased sister’s marriage (usually obligatory to marry her deceased sister’s husband) is still widespread.
In particular, it should take steps to reduce the increase in cases of gender-based violence and to ensure that victims have access to justice.
Human Rights Watch said in extensive field research in 2018 and 2019 that the absence of strong laws against gender-based violence and institutions that provide assistance to victims, as well as social pressure and stigma, prevent women and girls from seeking help when they are abused. Authorities do not provide victims with adequate health care, psychiatric services, and legal support, forcing NGOs to operate with limited capacity. Rape victims who file complaints with the authorities risk prosecution for having sexual relations outside marriage.
Few sexual assault survivors would dare speak out in Mauritania. Those who file complaints with the authorities are forced to deal with a legal system that does not do justice to women and does not encourage victims to press charges, but rather punishes them, and does not provide adequate support services to victims.

Shedding light on all forms of immoral and inhuman practices that women are subjected to is the duty of every free person, because violence against women is among the silent topics, and everything that is happening about it is obscured because Mauritanian society is patriarchal in nature.

Our Organization is particularly concerned about the ongoing violations of women’s rights in Mauritania and the persistence of discriminatory laws; harmful traditional practices, including early and forced marriage and female genital mutilation; violence against Woman; bondage; Limited access to education, employment and care
There are many challenges that women in Mauritania are facing every day, but if they put their minds to it, they can overcome them. However, this depends on the will and the self-confidence of these women. A woman is not born to be oppressed. Her possibilities of achieving her goal do not depend on anyone else, and in this sense, the oppression does not exist. However, there is a long way to go.
Because of Islamic Sharia laws, women are persecuted. What is even worse is the silence of international human rights organizations, because the silence and the failure to shed light on the suffering of women in Mauritania is a contribution to the crime.
we must continue the struggle for human rights in Mauritania because rights are not given but taken.